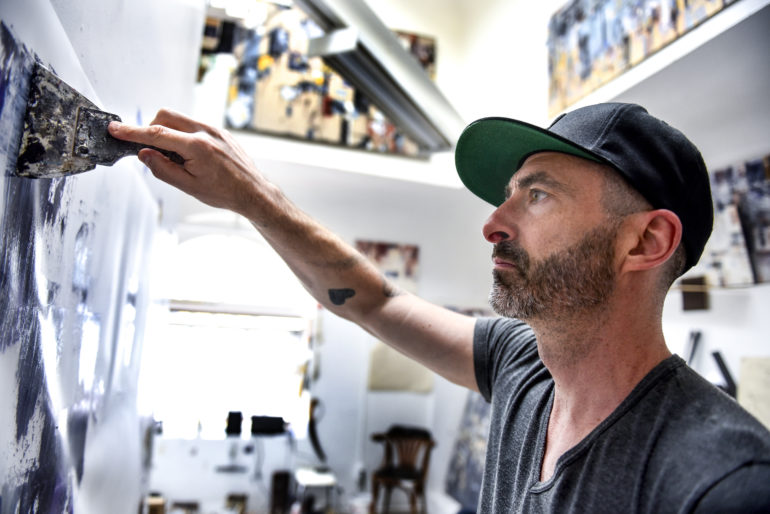 Johnny Taylor (b. 1973) is a contemporary abstract painter.

He has been pursuing his current methodology for the past fifteen years. His recent work combines aspects of modern architecture, traditional Chinese painting and Japanese woodblock prints. His foundation was shaped by early Canadian landscape painting, abstract expressionism and blueprint drafting.

Taylor’s passion to study Japan’s diverse art and culture took him to Tokyo for the fall of 2015 to a studio residency at the acclaimed 3331 Chiyoda Arts Centre to create alongside fellow international artists. He covered over six hundred kilometres of the metro area of this storied city on foot, immersing himself in its unique history and architecture. These explorations inspired a new vision for his contribution to a group show, as well as his piece in a public setting for the newly launched Trans arts Tokyo festival in the city’s bustling Kanda district. Here he painted live, creating a large panelled mural work in the basement of a demolished high-rise. He returned to Japan the following spring to draw further inspirations from the fabled cherry blossom season.

The collective experience of this creative period has left a vivid imprint on his current output, reflected in his latest body of work, Tokyo Lights, displayed in the spring of 2016 at the Bugera Matheson gallery in Edmonton.

Taylor has made a practice of allowing the persona of each distinct working environment to directly influence his process – as have the leaky garages, Gastown attics and abandoned East Van storefronts that have comprised his studio settings over the years. Johnny is currently creating in a cabin studio in the idyllic Fraser Canyon of British Columbia, where the direct connection to nature adds yet another dimension to his work.

Taylor was a merit scholarship candidate at the school of the Art Institute of Chicago. He has been featured in Ion Magazine, The Vancouver Sun, The Vancouver Observer, Scout Magazine and Artweek LA. Art Perspective represents Johnny across Western Canada and he frequently travels to California where he shows with Bermudez Projects In Los Angeles. His work is also carried by Melissa Morgan fine art in Palm Desert. Works by the artist are held in private and public collections throughout North America, Europe and Japan.